Mount Charleston Nevada, officially named Charleston Peak, at 11,916 feet (3,632 m), is the highest of the Spring Mountains of southern Nevada and the state’s eighth highest mountain peak in the 89124 zip code. 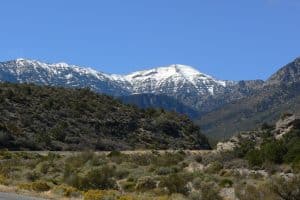 Mount Charleston is a mountain and ski resort located in the Spring Mountains National Recreation Area, about 40 miles northwest of Las Vegas, Nevada.

The highest peak in the Spring Mountains is the mountain, which reaches 11,918 feet.

Mount Charleston is known for its alpine forests, which provide a cool and refreshing escape from the hot desert temperatures.

The mountain is a popular destination for outdoor enthusiasts, offering a variety of activities such as hiking, mountain biking, and rock climbing.

The mountain is also home to a ski resort, which operates during the winter months and offers skiing, snowboarding, and other winter sports.

In addition to its outdoor recreational opportunities, Mount Charleston also has several small communities, including the Mount Charleston Village, which offers a variety of amenities such as restaurants, gift shops, and lodging options.

Mount Charleston is a mountain and ski resort located in the Spring Mountains National Recreation Area, about 40 miles northwest of Las Vegas, Nevada.

The ski resort operates during the winter months and offers a variety of ski runs for skiers and snowboarders of all skill levels.

The mountain has a base elevation of 8,512 feet and a summit elevation of 11,918 feet, and it receives an average of about 200 inches of snowfall each year.

The ski resort has a total of 25 runs with a variety of terrain, including groomed runs, moguls, and tree skiing.

In addition to skiing and snowboarding, the ski resort offers other winter sports, such as tubing and cross-country skiing.

The ski resort has a lodge that offers food, rentals, and other amenities.

There are also several small communities on the mountain, including Mount Charleston Village, which offers a variety of lodging options, restaurants, and gift shops.

It is about 35 miles (56 km) northwest of Las Vegas and is within the Humboldt-Toiyabe National Forest, the Mount Charleston Nevada Wilderness, and the Spring Mountains National Recreation Area.

Mount Charleston Nevada is a Second Homes for Sale year-round getaway for Las Vegas’ residents and visitors, with several hiking trails and a modest ski area.

The Nevada mountain, which is snow-capped more than half the year, can be seen from parts of the Las Vegas Strip when looking toward the west.

Running for 50 miles along the west edge of Las Vegas, the Spring Mountains mark the start of Nevada’s Great Basin Desert, characterized by tall, narrow ridges separated by broad, empty valleys, and differing from the Mojave Desert to the south in that the temperatures are lower, average elevation higher and annual rainfall greater.

All such mountains are well separated from neighboring ranges by the much lower and more extensive desert land in between, and so harbor distinct plant and animal life and a variety of climate zones nearby.

Both these aspects are illustrated by Mt. Charleston NV property, the highest summit of the Spring Mountains (11,918 feet), whose foothills may be reached by an easy half-hour drive from downtown Las Vegas.

The second homes for sale are cabins and luxury mountain chalets, full-time or part-time.