Summerlin rebounds 2016 in the national limelight, the Summerlin master planned community of 26 years is experiencing strong growth in Southern Nevada over the following 2 decades.

The Summerlin community of homes is going to finish 2016 with 650 new home sales, the most since the Great Recession and cementing No. 1 position in the Las Vegas Valley.

Executives of The Howard Hughes Corp., who said Summerlin may sell even more houses in 2017, have summarized a two pronged approach to grow market share in the future by not only providing even high end multi-million dollar houses on hillside lots, but smaller and more affordable housing throughout Summerlin. 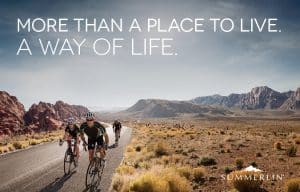 More than 6,000 of the 22, 500 acres that make up Summerlin are accessible for development.

The Summerlin master planned community is home to about 100, 000 people.

Construction of additional 40, 000 more homes could double the Summerlin population.

On the commercial side, an expansion pro hockey franchise that can start play next autumn, an ice hockey training facility for the NHL Vegas Golden Knights, is under construction and can open near Red Rock Resort.

Discussions delayed in 2016 with Clark County for funding a brand new minor league baseball arena in Summerlin for the Las Vegas 51s.

The 106 acre piece of Downtown Summerlin that contains 1.4 million sq ft of restaurant, retail and entertainment choices. Crate & Barrel to open in 2017.

Summerlin rebounds 2016 Hughes Corp. is contemplating breaking ground on 150, 000 sq of high end office space near the ice hockey facility as part of 400 acres of its greater downtown that stretches north to Charleston Boulevard and contains Red Rock Resort.

On the residential side Summerlin master planned community remains in a good position to fill the void of new home demand in the valley that’s otherwise constrained by the lack of available land.

Summerlin has single-family homes to townhomes priced from the $300,000s to more than $2.5 million.

Property in Summerlin that is situated in higher elevations, some as high as 4, 500. Six of the neighborhood areas to open in 2017 have been in the Cliffs and one is in the Ridges.

More than 60 lots have been sold in an exclusive Summit Club, a 550 acre joint venture with Discovery Land Co.

The Tom Fazio designed golf course is likely to be finished in February.

The very first of the multi-million dollar houses might be finished by the ending of 2017.